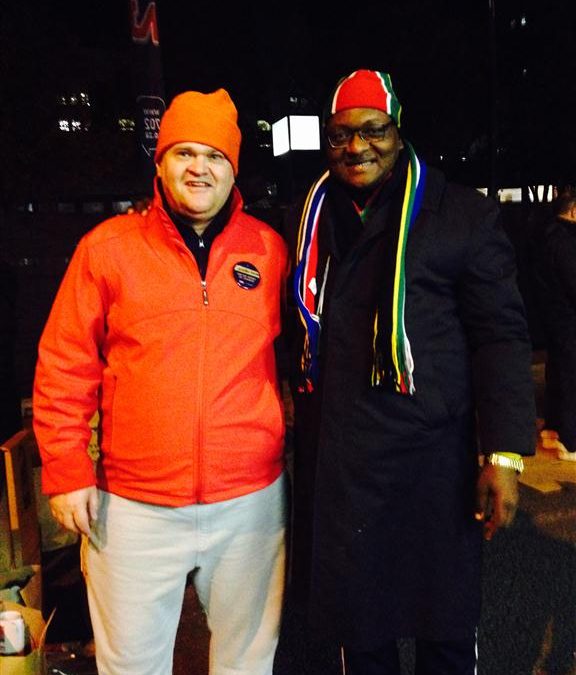 Johannesburg – According to News24 , one mining boss slept for three and a half hours on the cold hard ground, a media head honcho slept on an empty stomach and a mayor managed to find a bench to nap on during the chilly early hours of Friday morning. This was all in the name of raising funds for a non-profit organisation called Girls and Boys Town.

By the end of the event at 06:00, more than R20 million had been raised. “It was freezing cold, but it didn’t get to us because we were already dressed for the weather,” Lonmin CEO Ben Magara told News24. “But it didn’t prepare us for the floor, it was hard and cold.

You were tossing and turning, it was a really humbling experience.” The CEO SleepOut initiative, hosted by Talk Radio 702, began at 18:00 on Thursday. More than 200 chief executives took part from the mining, banking, media and telecommunication industries. Participants were each given a cardboard box, a sleeping bag, a bread roll and a mug of soup for the night. There was a hub of activity as well as entertainment for the participants until lights went out at midnight. “I went to bed after 1 am and I was up by 4.30am.

The cold hard floor was a humbling experience,” Magara said. He described the initiative as good fun and a time to reflect on one’s own life and circumstances. “I grew up poor and you tend to forget. We really should do our part as citizens of this country … It was well worth it and I would do it again.” CEO’s from across SA spent a night on the Joburg streets as a part of the 702 Sun International CEO Sleepout challenge, which aimed to to raise money for Girls & Boys Town. Mail & Guardian CEO Hoosain Karjieker, who is observing the month of Ramadan, said the event was timeous as he is already going through a period of reflection through fasting. “It’s good to know that there’s a wide group of people pulling for a similar cause. The fact that we raised a large amount of money from it was great. There was no romanticising it, it wasn’t made soft for us.”

Karjieker said feeling the cold hard ground, even though he was dressed warmly, made him think of those who slept on the streets daily, with even less clothing on their backs. “It was really tough. I had no idea of the pain one goes through in such cold weather and a hard surface. I don’t think I got a good sleep. “It highlighted the pain and suffering that people actually do go through. It’s really been implanted in my mind. Hopefully when we’re all back at our desks we will think about this.”

City of Johannesburg Mayor Parks Tau and Gauteng Premier David Makhura were the only top government officials at the event. Tau praised the private sector for leading the initiative. He said he managed to nap on a much sought-after bench in the vicinity for a short period.

“The opportunity was good, we got to interact with some of the country’s business leaders.” “We’ve never seen something like this before where the private sector went out of their way for a good cause and came out in their numbers,” said Tau’s spokesperson Phindile Chauke.