A commemoration of Freedom Day – 27 April

The South African activist and former president Nelson Mandela (1918-2013) helped bring an end to apartheid and has been a global advocate for human rights. A member of the African National Congress party beginning in the 1940s, he was a leader of both peaceful protests and armed resistance against the white minority’s oppressive regime in a racially divided South Africa.

His actions landed him in prison for nearly three decades and made him the face of the antiapartheid movement both within his country and internationally. Released in 1990, he participated in the eradication of apartheid and in 1994 became the first black president of South Africa, forming a multiethnic government to oversee the country’s transition.

After retiring from politics in 1999, he remained a devoted champion for peace and social justice in his own nation and around the world until his death in 2013 at the age of 95.

To commemorate Freedom Day, we look back at the events that took place in April, 1994 as the country ended three hundred years of colonialism, segregation and white minority rule and established a new democratic government and new constitution.

View our tribute gallery below. 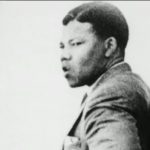 On December 5, 1956, Mandela and 155 other activists were arrested and went on trial for treason.

The next year, police opened fire on peaceful black protesters in the township of Sharpeville, killing 69 people. 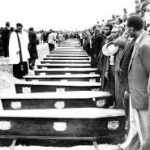 ; as panic, anger and riots swept the country in the massacre’s aftermath, the apartheid government banned both the ANC and the PAC. 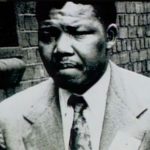 Forced to go underground and wear disguises to evade detection, Mandela decided that the time had come for a more radical approach than passive resistance. 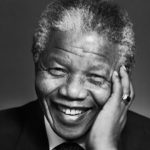 Despite his forced retreat from the spotlight, Mandela remained the symbolic leader of the antiapartheid movement. 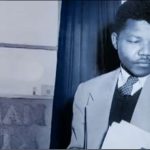 All of the defendants were acquitted in 1961, but in the meantime tensions within the ANC escalated, with a militant faction splitting off in 1959 to form the Pan Africanist Congress (PAC). 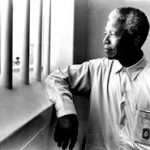 Nelson Mandela spent the first 18 of his 27 years in jail at the brutal Robben Island Prison, a former leper colony off the coast of Cape Town, where he was confined to a small cell without a bed or plumbing and compelled to do hard labor in a lime quarry. 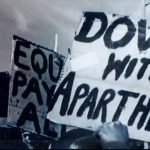 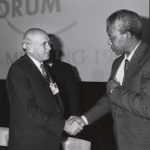 The following year, newly elected president F. W. de Klerk (1936-) lifted the ban on the ANC and called for a nonracist South Africa, breaking with the conservatives in his party. On February 11, 1990, he ordered Mandela’s release. 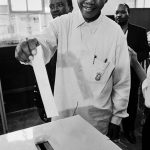 Mandela casting his vote in 1994 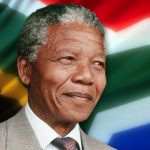 After attaining his freedom, Nelson Mandela led the ANC in its negotiations with the governing National Party and various other South African political organizations for an end to apartheid and the establishment of a multiracial government. 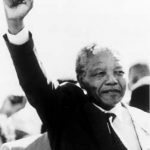 After leaving office, Nelson Mandela remained a devoted champion for peace and social justice in his own country and around the world.